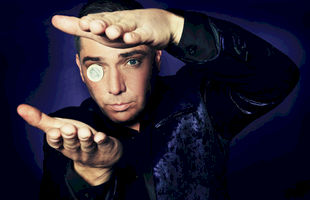 Magician and mentalist Armand provides an unparalleled interaction with the audience in which class, wonder and humor are central.

Armand has already been deployed at many events such as Tomorrowland and private parties. A personal approach and hip acts make magician Armand one of the most booked magicians in Belgium. He successfully participated twice in Belgium's Got Talent and worked for SBS6, NJAM TV, VTM,...

Armand Magic is active in Belgium, the Netherlands, Germany and France.

From the smallest village festival or communion to the largest events and company parties are already on his list of achievements. With his great knowledge of self-created acts, just about anything is possible to turn your party into a magical spectacle. Put your company or logo in the spotlight with a tailor-made act by magician Armand. No corny tricks but cool visual stunts and true mindf*ck!

Bet that your invitees will talk for a long time about what they were allowed to experience once magician Armand appears in their path and disappears?

Abraca thank you for an unforgettable evening

Armand Magic is a wonderful experience that one will not soon forget. We sat on our noses and rolled from one surprise to the next. Despite our small group, we still sat at the table with three different cultures/languages, but that turned out to be a piece of cake for Armand. Dutch, French, English,... the whole group hung on his every word. There was shouting, ranting and laughing with pleasure. Everyone was very grateful for the very nice experience. This is really a top notch recommendation. If you're still in doubt, just do it!

Fantastic magical entertainment at our wedding party. We have received nothing but rave reviews from our guests.

What a wonderful experience! From one surprise to another! Highly recommended

Armand Magic captivated both young and old. Thank you for a lovely afternoon, highly recommended! ✨

Armand at the Mennefeesten in Ingelmunster. He knows how to amaze both young and old with his magic skills. The close response and interaction with the audience make the difference here! highly recommended.

Armand was very good. I booked him one year ago for my 50th birthdayparty. Magician contacted me one week prior to the event, asking about the size of the group, location and what I was really looking for. His performance was just what I needed at that moment. My team were extremely enthusiastic and talking about his performance for another week.

Seen some really nice tricks last month. As a surprise act at the party, this was a nice addition. Even though the DJ was already busy, you just kept surprising us. Very impressed and hope to see you again! Greetings Anouk

Booked this artist with very high expectations on the advice of an acquaintance. But what an experience! In no time he packed everyone with his amazing and super cool tricks! Already seen several magicians at work, but this one stands head and shoulders above the rest. Extremely flexible and feels his audience perfectly. Thank you very much for making my birthday unforgettable! My friends are still talking about it. Top level, really!

Campari match always stayed with us !!